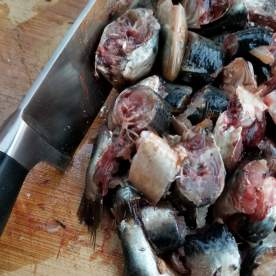 We started a batch of what the Romans called Garum, a delicacy across Ancient cultures: fish sauce! The gross way to say it? Fermented fish guts.

It’s been almost 8 weeks. My layers of salted, chopped sardines have been fermenting in the fridge, their essence dissolving in salt.  This could go for much longer, but I think it’s ready to strain and try! 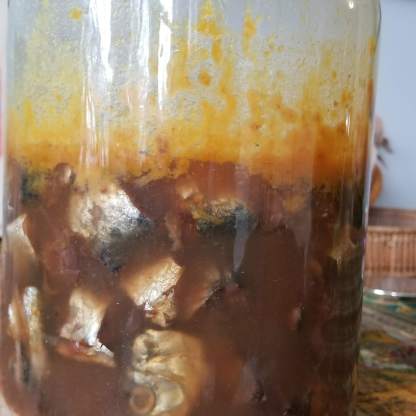 I made Liquid Gold:

Line a mesh strainer with two double layers (yes, a lot) of cheese cloth, pouring in the fish mixture. It will take a long time to strain this way, but you will be rewarded with a cleaner sauce. Feel free to stir to help the process along.

I HIGHLY suggest doing this outside!

And that’s it! The end result is a sauce that’s similar, but also distinct from fish sauce bought in the store.  It’s actually less fishy, with more of a delicious, meaty, umami blast of saltiness.  It’s great in stirfries, mixed with other things into dipping sauces, or added just a couple drops at a time to nearly anything to give great depth of flavor.  It’s no wonder civilizations across history and geography have all enjoyed their own versions of garum. 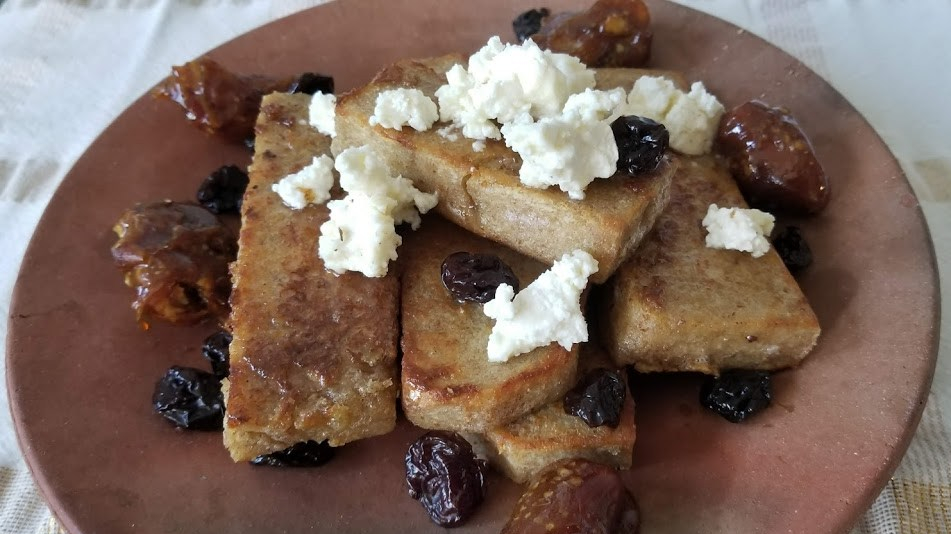 It’s Christmas time!  The true meaning of the holiday is complicated, and always has been, thanks to its mix and match ancient origins (yes, before the birth of Jesus).

Even though that famous nativity scene is the official reason for the holiday, many of the activities and traditions we practice at Christmastime come from much older customs celebrating the winter solstice.  Decorated trees, gift giving, holly, mistletoe, caroling, and much more all have ancient, B.C. origins, and were later folded into the Christian celebration.

No ancient holiday influenced Christmas more than the Roman Saturnalia. The actual date of Jesus’s birth is unknown, but in the 4th Century A.D., Pope Julius I declared it to officially be December 25th.  Many speculate that this was to Christianize Saturnalia, a holiday that many in Medieval Europe still celebrated despite the fading out of Rome.

Saturnalia was known for gift giving, charity, and above all, feasting and merriment! So to celebrate, I dug into Apicius for some dulcia, or sweets recipes, to make a dessert plate worthy of both a festive Roman noble, and a  chef and amateur historian thousands of years later. 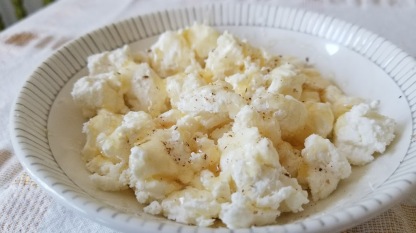 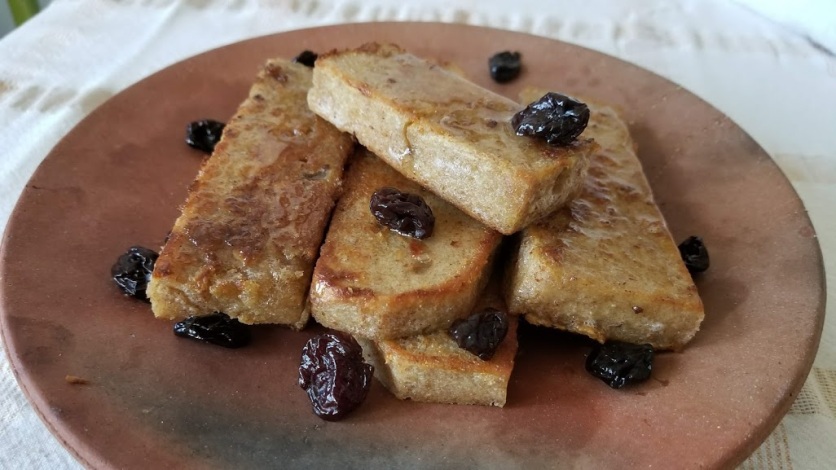 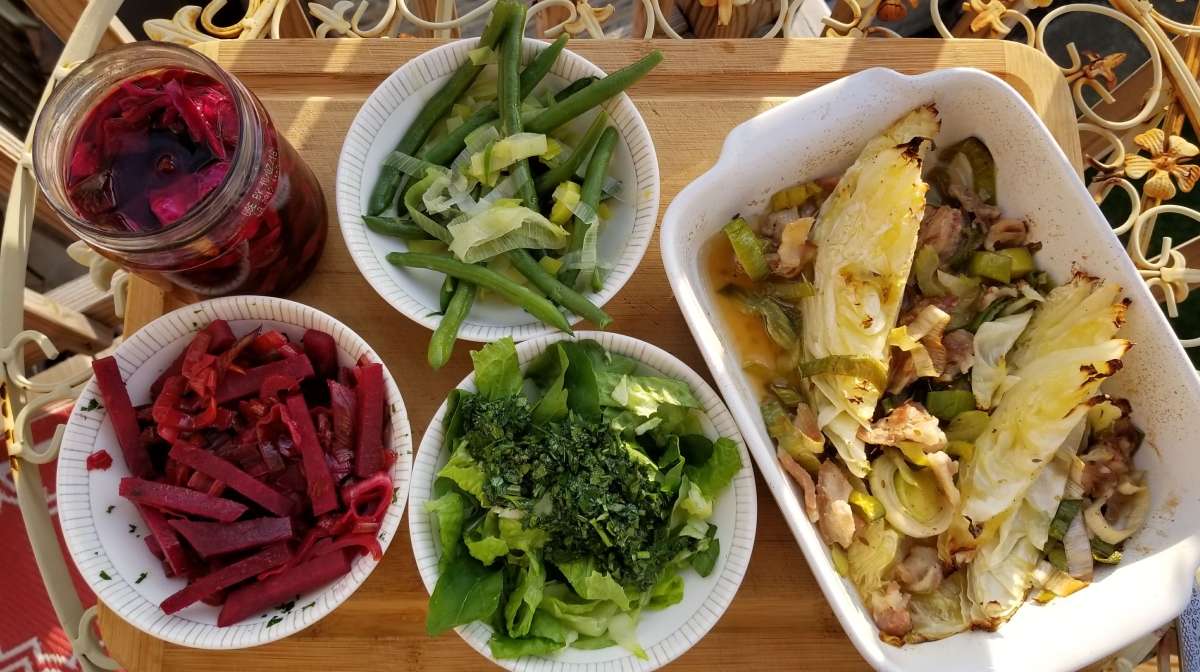 We know by now that vegetables made up a huge part of the ancient diet. Across civilizations, the majority of people got most of their calories from grain and veggies alone, and even those few wealthier foils who could afford meat supplemented extensively with plant food.

Food historians know all about the ingredients the ancients ate, but as for exactly how they were prepared, we’re often left in the dark. With the Roman Apicius’s book “On Cookery”, we finally have some recipes that give a little insight. Out of them, I’ve prepared BEETS TWO WAYS, LEEKS AND BEANS, ROAST CABBAGE WITH PORK BELLY, and a GREENS AND FIELD HERBS SALAD. 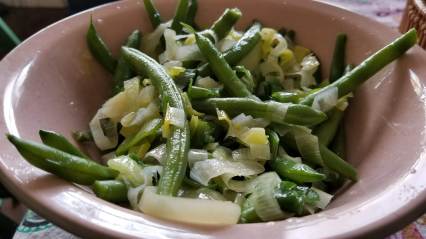 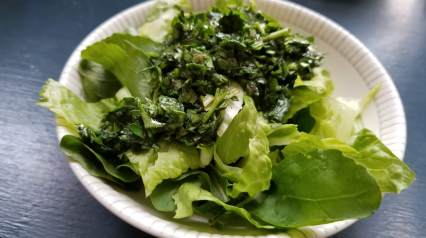 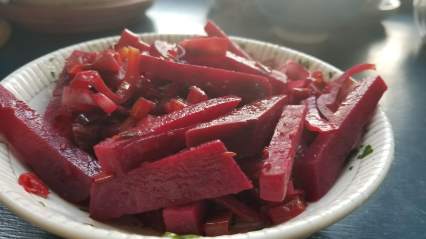 To a modern cook, these recipes might seem basic. But I would argue they only appear that way. These preparations are simple, yet elegant ways to maximize and feature the flavors of individual plants and ingredients. Old world vegetables and spices, prepared at their finest.

So let’s dive right in. END_OF_DOCUMENT_TOKEN_TO_BE_REPLACED

Rome. Probably what most people think of when they think “Ancient World”. In this episode, however, we discover that in terms of the culinary, the Roman Republic and then Empire was most distinguishable as a lens into the diets and cooking of the wider ancient World before it.

Come listen to find out more.

Music for this episode performed by Michael Levy of Ancient Lyre. His albums An Ancient Lyre, The Ancient Greek Tortoise Shell Lyre, and The Ancient Egyptian Harp are available from all major digital music stores and streaming sites.

AVAILABLE ON ITUNES and GOOGLE PLAY.
Please leave a review to help spread the word!