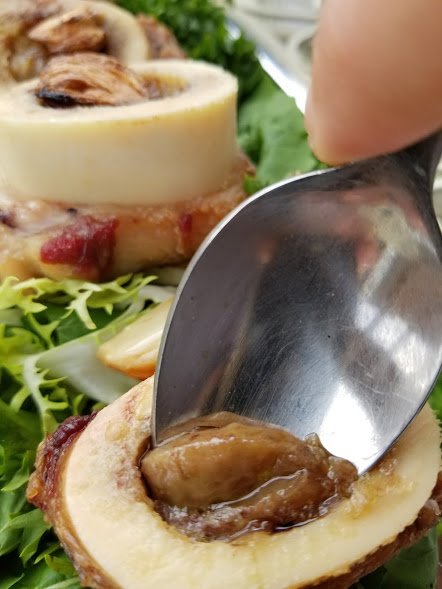 Preheat oven to 400F. Lay out marrow bones on foiled baking sheet, coating with olive oil and salt to taste. Peel and smash garlic cloves, rubbing them onto marrow and leaving in place for roasting.
Cook in the oven for 15-20 mins, until the marrow is bubbly not so long that it liquefies and falls out of the bone. Let cool 5 minutes, then scoop out and enjoy with bread or salad.

Today we’re talking bone marrow, our last pre-Neolithic inspired recipe for a while before we dive into bread, beer, cheese, and settled life. 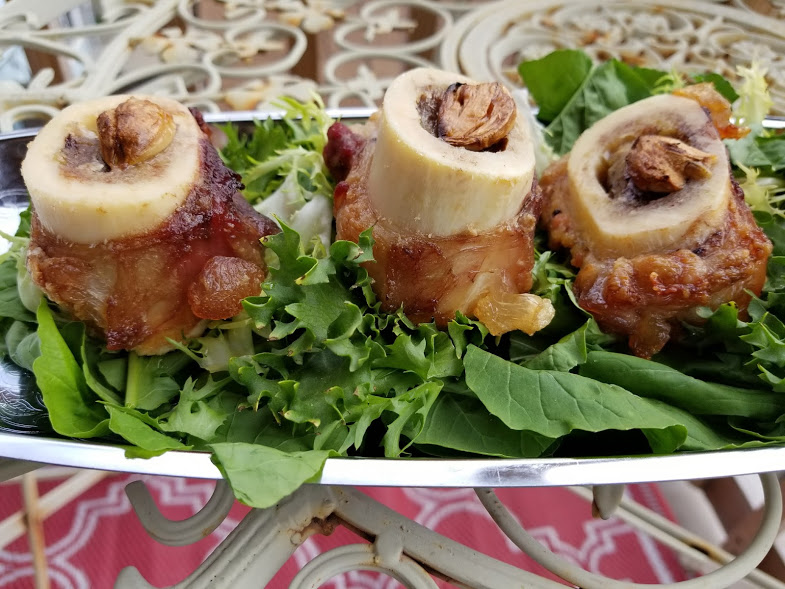 If you listened to the first episode of the Anthrochef podcast, you know that eating meat played a big role in growing the brains of our earliest ancestors.  Remember though, that we did not start out as hunters, but rather as scavengers.  DNA evidence shows that the earliest humans ate with the dogs and picked clean carcasses some other predator had already killed.

But most of the good meat was already gone by the time these upright apes could get to it. What was left besides a few meager scraps? 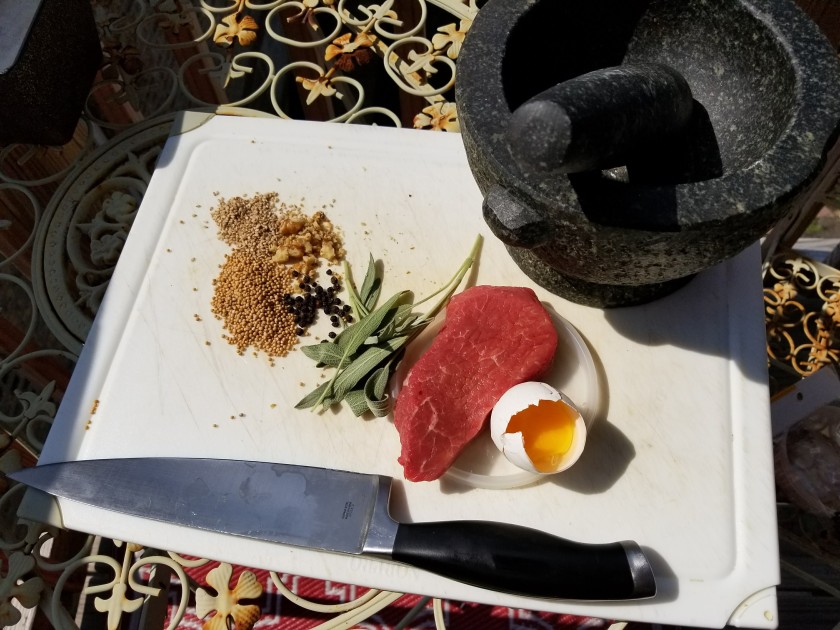 Imagine you are someone else. Someone entirely different.  It’s the mid Pleistocene era, almost two million years ago, which means you are not even a homo sapien.  You are homo erectus, an upright, fairly intelligent human ancestor.  You are not the first in the hominid line to eat meat.  Homo Habilis, Homo Ergaster, and even earlier hominids before you were picking already dead carcasses something else had hunted clean and smashing bones to suck out the delicious marrow.

But you, homo erectus, are what we call the first persistent carnivore. You have stepped up your hunting game, and no longer need to scavenge off of bigger predators, meaning you can obtain enough meat to call it a regular part of your diet.

It’s possible you knew how to cook this meat. Anthropologists don’t agree if homo erectus were the first cooks or not.  Either way, you my friend, have been born too early to know the secrets of fire.  You are stuck with raw meat.

All your family and friends are good with just smashing and scarfing, but you feel unsatisfied.  There is something stirring inside you, a desire for flavor, and something novel to eat.  You don’t know this, but you have the inner being of the first chef!

We’re also missing a lot of ingredients to make a “classic”, modern version of steak tartare, namely pickles. But you are an ancient chef.  You are going to make something delicious out of this.  Let’s see what you can gather.

END_OF_DOCUMENT_TOKEN_TO_BE_REPLACED

What makes us human? Humans are just animals who know how to cook. This first episode attempts to explain what humans and our hominid ancestors have been eating for the 6 million years since we first came down from the trees, how taming fire and cooking gave us our big brains and human culture, up through the foraging days of homo sapiens hunting and gathering in the Paleolithic.

Pleased to finally post the first episode of the AnthroChef Podcast, the History of Food!

Theme music by the incredible Michael Levy of Ancient Lyre. This rendition of the Hurian Hymn, the oldest known piece of sheet music, and the whole album “An Ancient Lyre” and much more is available from all major digital music stores and streaming sites.

AVAILABLE ON SOUDNCLOUD AND ITUNES.
Please leave a review to help spread the word!

END_OF_DOCUMENT_TOKEN_TO_BE_REPLACED

Before fire, before homo sapiens even, there was a primitive form of cooking that required no heat or fuel but that of the human body.

The oldest known mortar and pestle goes back almost 40,000 years ago, but we know mashing food goes back to some of our earliest human ancestors, who likely smashed bones to access their delicious marrow.  They turned what whole meat they could scavenge into something like steak tartare. This high calorie, high in protein meat played a big role in growing our brains closer to their modern size.

Human foragers of the past had a vast knowledge of plants, animals, and ecology that would put most of us “civilized” people to shame.  Modern foraging people studied by anthropologists are like nature encyclopedias for their territory. 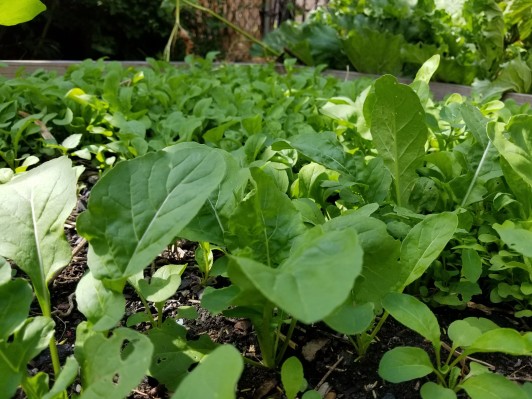 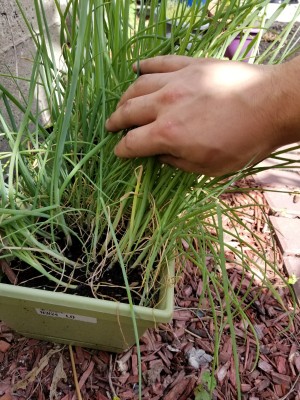 “Wild” greens, onions, and berries from my territory

END_OF_DOCUMENT_TOKEN_TO_BE_REPLACED

Sometimes eating authentically is not eating deliciously. At least not to our spoiled modern palates.

While still using modern milled flours, this recipe attempts to recreate something like ancient foragers in the Near East might have eaten.  The Natufians were the first society we know of to switch from foraging to intense cultivation, and it changed the world forever. They were still dependent on hunting and gathering, but also began guarding and storing plots of wheat and barley, and it changed them dramatically.

But to the Natufians  it was everything. Their new permanent villages had giant querns and grinding stones just for milling and shaping this hard to process cereal crop, and ritual houses for the necessary magic to make it work.  Here’s a recipe that might be something like what they threw in the ashes of their fires.

FAIR WARNING: This bread is dense and chewy!! Good for croutons or toast but… not much else.

END_OF_DOCUMENT_TOKEN_TO_BE_REPLACED 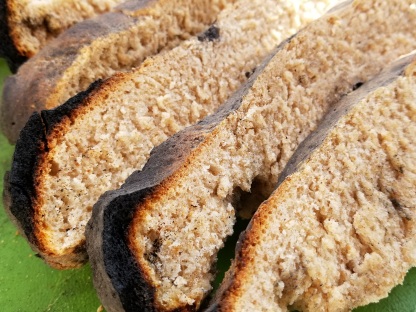 This recipe takes the ancient cooking technique, and gives to it modern ingredients, making a stretchier dough with a lighter texture that’s more enjoyable to modern palates. All the smoky flavor of the ashes without the  unleavened chewiness of the more authentic recipe.  This is a great flatbread recipe even for a regular oven, but nothing tastes quite like the ash.

Activate the yeast in the water. After five minutes, whisk in the honey, olive oil, and salt.  Add to flour and stir until a rough dough forms. 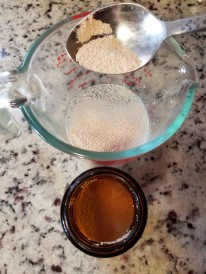 END_OF_DOCUMENT_TOKEN_TO_BE_REPLACED

Just what it sounds like.  Today I made bread in the ashes of the fire.

This has become known as kind of an Australian food. But that’s because European colonists copied the Aboriginal peoples who had been doing it for thousands of years.

Many modern people with nomadic traditions, such as the Berbers of North Africa, still cook bread this way, but the roots go deep back into prehistory. Evidence for this practice can be found in ancient cultures all over the world from the Americas, to aboriginal Australia, and most famously in the middle east.

END_OF_DOCUMENT_TOKEN_TO_BE_REPLACED 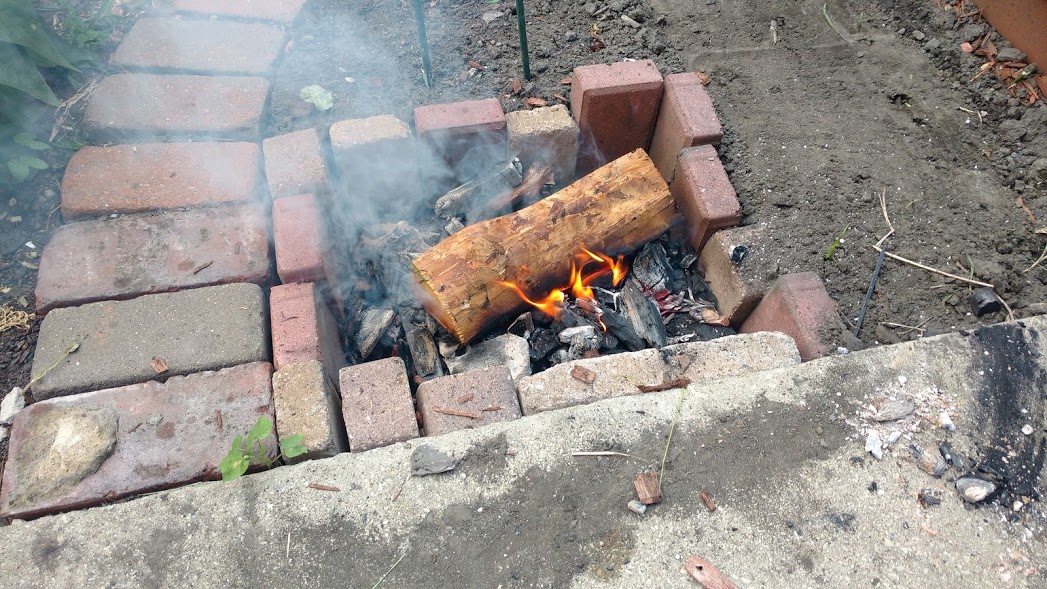 Short of mashing our food or cooking it over an open fire, the Earth Oven is the oldest cooking method known to humankind.  Evidence of their use goes back tens of thousands of years, and they can be found all over the world across nearly all cultures.

The exact construction can vary, but the basic design is the same. Dig a pit in the ground, line it with stones, get those stones blazing hot, then put some food in and bury it!  This method can bake, smoke, or steam food. It’s not as much work as it seems, and it makes for a exciting cooking experience that’s great for parties and summer barbecues especially.

Not only is it fun, it imparts a unique flavor to the food that’s cooked inside one that can only be described as “earthy” and makes any other food I’ve heard called “earthy” before this seem like a lie.  Soil infused?  This stuff tastes like it was cooked inside the earth, because it was!

If you’re interested in new and interesting ways to cook your food, you cannot beat an Earth Oven.