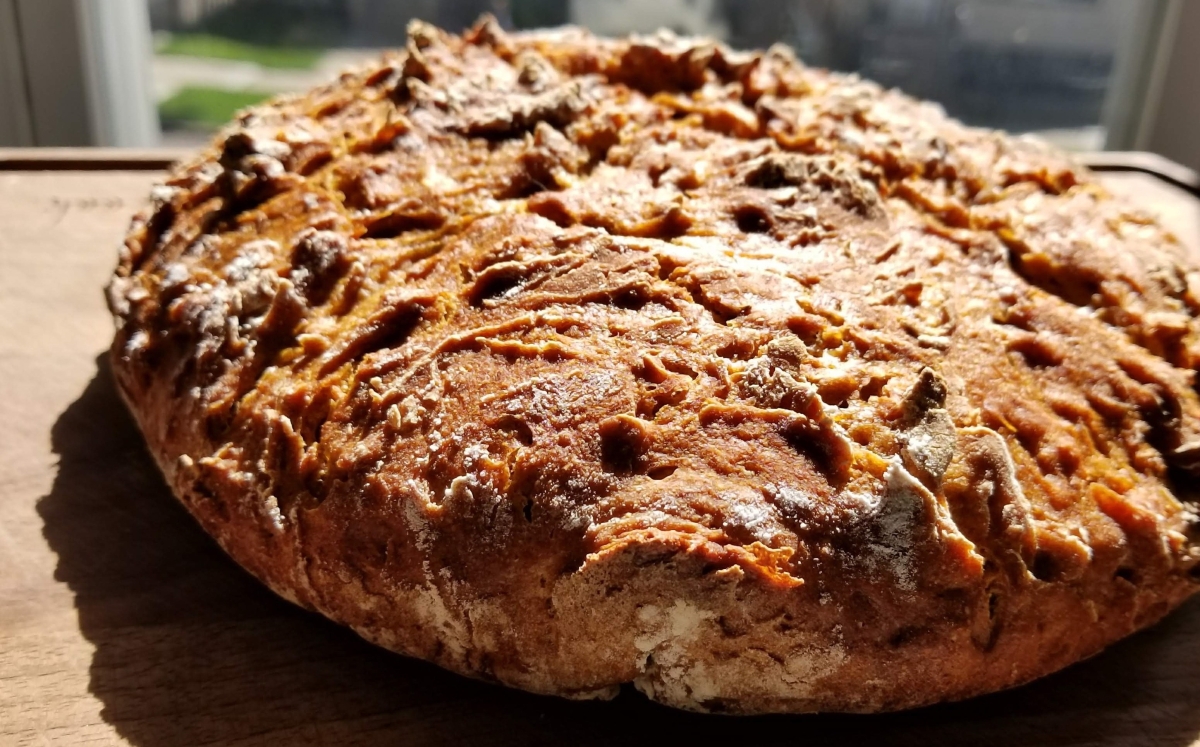 How the times change. Today, this rye could be an expensive artisan loaf in a high end bakery. In dark ages Europe, it was food for peasants.

This is a true Middle Ages commoner’s bread, as there is no wheat flour involved. It’s almost all rye, but cut with a little barley and oats which were the only grains many serfs across Medieval northwest Europe would have had on hand. It makes a dense, chewy bread, whose texture still manages to be pleasant, that’s healthy for a carbohydrate, and packed with tangy rye flavor. It’s also very easy to make, with no kneading required, just many hours of waiting time.

Though be careful where you get your rye from. You don’t want to contract St. Anthony’s Fire like poor old Waigulf from the other side of the manor. Ate a bad loaf and was dead soon afterward, ‘e was.

*(Note: For a slightly more noble experience, sub out the barley flour for whole wheat, for a lighter bread that’s more fitting of your rank and titles.)

Start by boiling some water and pouring it over the whole rye berries. Let steep for one hour then drain. Meanwhile, mix all the flours and seeds and salt together.

Make a well and pour in the water, stirring in the molasses without mixing much flour in, then stir in the starter or if using yeast, sprinkle it on top of the liquid, then stir everything together. with a wooden spoon until no dry flour remains.

Cover and let rest 15 minutes. Stir again. Cover and rest another 15 minutes, then stir and cover it one more time. It will be very sticky and formless. That’s okay.

Now cover, sit in a warmish room temperature place, and let that dough ferment for 12-24 hours. The longer you proof, the more sour the eventual flavor. After a few hours, it should already look something like this:

I usually make the dough the night before to make the next morning. Whenever you’re finished with the long proofing period, scrape the wet dough onto a heavily floured surface (okay, you got me. I cheated here and used some regular AP Flour for this). Flour your hands and shape the dough into a round loaf. Cover with the bowl and let it proof for one more hour.

Don’t worry if the loaf doesn’t rise much. It won’t. See how flat mine is? That’s just how near wheatless loaves go. It will get a bit of spring in the oven, but not that much.

Speaking of that, you’ll want to preheat the oven to 475F for a good 30 minutes before use, as well as whatever vessel you’re cooking it in. Any iron or ceramic cookware will work, though something with a lid works best.

Dust the loaf and a knife with flour and score the bread. Generously flour the bottom of the preheated baking vessel and gently set the bread inside. Close the vessel and cook 2o minutes. Remove the lid, and bake another 15-20, until dark and crispy and the internal temp is about 200F.

I thought this bread was gonna be unpleasant, but it turned out to be really delicious. The tangy sourdough and spice from the fennel make for a strong, unique flavor. And its heartiness makes for a great sop to mop up soups, stews, or the juices of an herb-stuffed roasted chicken….

Serve it up with a rustic whole grain mustard too. Yum. Now that is what I call a delicious Medieval meal. Actually, it’s just delicious, period.